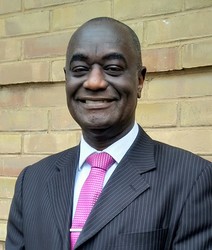 Dr Robinson Osei Addaih, member from the West Bletchley Community Adventist church was recognised by his local community in a special ceremony in honour of his relentless service, commitment to social cohesion and loyalty and impact to the lives of people within the ethnic minorities. The ceremony held at the Stantonbury Theatre, Milton Keynes on Sunday 4 November, was attended by a number of dignitaries including the Mayor of Milton Keynes, members of the Milton Keynes Equality Council, executives of various Ghanaian groups and church leaders.

The venue was filled to capacity with members of the community, many of whom had been the recipient of the support and advice provided by Dr Addaih in areas of immigration, financial and legal counsel, much of which was done freely. Dr Addaih has served the community for over 30 years working as a senior analyst. He is also a magistrate which he has done for 15 years and occasionally sits at the Crown Court.

The ceremony comprised of musical items from artists LTC & Friends and Yaw Poku,

followed by the Mayor's address by
Cllr Martin Petchey. The impromptu part of the ceremony was an open floor for anyone to share how Dr Addaih has impacted their lives. These personal testimonies were very moving as individuals opened up, about how he had helped them over immigration and family issues in their time of need. The main event of the evening was the presentation of a plaque with a citation that contained some of the following words from the Mayor

Dr Robinson Osei Addaih, you are a giant among giants. You were not the first black person to have lived in Milton Keynes, but you stand out of the many through the help you have offered to countless numbers of people from the black ethnic minority community…

You have provided a shoulder for many to cry on. Your godly words of encouragement have drawn many out of the pit of despair and desperation into pathways of hope.

Dr Addaih who, through utter determination and unabashed love of interests in the fellow human, help those with immigration challenges, has strengthened the fabric of these aspects of the black community's cultural life.

In Dr Addaih's response he expressed his appreciation to everyone and thanked the organisers, whilst pledging his commitment to continue to serve his community and the people to whom God places within his path.

We applaud the work of Dr Addaih and the example he has set as an Adventist, in being at the forefront as an inspiration to the youth and adults both inside and outside the Church. He epitomises what God calls each of us to do when being the 'salt' and 'light' and that is to make meanin

gful inroads in our local communities where we worship each week. In so doing, that our presence is not only seen as individuals who attend church and then go home, but rather seen as someone who genuinely cares for the community and puts into practice Christian values and acts of love borne from a relationship with Jesus Christ that propels one to express the same love to those around.

Dr Addaih also served as Director of Personnel at the Milton Keynes Equality Council for several years and holds the following qualifications: BA, LLB, MA, PhD, JP. He is married to Christiana and they have three sons.